Gregory GOrDon made news world-wide when he broke into Ronald Reagan's home exposing Reagan as the Anti-Christ and proclaiming himself to be the second coming of Christ. GOrDon has just released a new book: "Jeeses Christ" which is Jesus' new name.

Orlando, FL, Sep 6, 2018 -- On July 4, 1990, GREGORY STUART GORDON found himself pushed face-first up against a wall, the business end of a Secret Service agent's handgun pressed against his head. Gordon had broken into PRESIDENT RONALD REAGAN's Bel Air, California, home. He was on a mission. When questioned about this mission, Gordon knew that what he was about to tell the agents would get him in a great deal of trouble. But he also knew that by telling them that he was there to kill Reagan, his life's work would finally garner the mass media exposure about which he had dreamed. 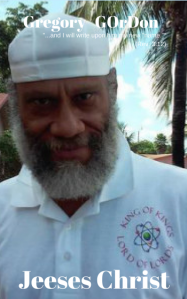 For more than three decades, GOrDon has gathered evidence and posited proofs on how Ronald Reagan is/was the antichrist, intent on destroying mankind. Citing the Bible and other ancient religious texts, pop culture media, government documents, and fields such as numerology, philosophy and encryption, Gordon has constructed an intriguing conspiracy theory that, if true, could change civilization on a global scale.

GOrDon also uses this array of sources to offer proof of another politico-religious tenet – that he himself is the second coming of Christ. He himself is the biblical Messiah, complete with the charge to destroy the antichrist and redeem the world. Interwoven through the presentation of the source material is a detailed account of the author's often tumultuous life as the second coming. The forementioned break-in is indicative of the iconoclastic "road not taken" path, which he maintains has been chosen for him.

The sometimes extreme nature of his research is reflected in many aspects of his life, including his times spent in jail and mental health facilities, his on-air relationship with HOWARD STERN, his defense of his drug use and sexual preferences, and his invention and marketing of the Dynamic Light Reflectors.

GOrDon's new book "Jeeses Christ" is a re-release of his classic book: "Ronald Reagan: Antichrist."  It contains updated information on the methods that GOrDon feels will create a "New Earth" including changing the world's computer keyboards from QWERTY to Colemak which will stem the trillion dollar Carpal Tunnel Syndrome Pandemic, alerting women to the availabilty of water birthing in the hope of curbing abortions and his own invention of "The Water Engine" which is a water vortex driven perpetual motion machine that pay a consumer's electricity bills and even earn them up to $72,000 a month in Florida under America's new "Net Metering Laws."

That tropical storm Gordon hit his home state of Florida two weeks after the release of the new book is just one of the many "Mysterious Ways" in which God works.  In the book of Jeremiah chapter 30 the Bible speaks of the "Whirlwind of the Lord" that "in the latter days," people will consider.  Consider this:  GOrDon's own invention "The Water Engine" works on a water vortex which is actually a "Whirlpool;" very similar in workings to a "Whirlwind."

The book: "Jeeses Christ" is now on sale on the publisher Lulu.com's website and will be available in time for Christmas 2018 on websites such as Amazon.com and BarnesandNoble.com.  Currently GOrDon is seeking Journalists, Preachers, Pastors and Lay reviewers to review the title and bring the information of the coming of the second Christ to the attention of the world.

For more information or to order the book please visit:  http://www.lulu.com/spotlight/greggordon