Tampa, FL, Feb 16, 2019 -- To celebrate Valentine’s Day this year, YouTube’s Prince’s Friend has a sweet treat in store for his viewers with the release a special two-part interview with an extraordinary woman from the Prince alumni camp– singer, songwriter, entrepreneur, and social activist, Shelby J. 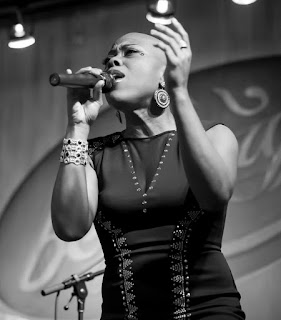 Shelby Johnson is a native of Greensboro, North Carolina and has been gracing stages around the world with a number of notable musical phenoms over the past 20 years.  None have been more legendary though than Prince Rogers Nelson who dubbed her as “Shelby J.” in 2006.

Shelby’s musical career started in 1994 singing background vocals for the hit group Groove Theory. In 2000 she became the lone female member of D’Angelo’s band, “The Soultronics” performing with him in the highly acclaimed “Voodoo Tour” alongside close friend and Grammy Award winning R&B sensation Anthony Hamilton. In early 2003, Shelby collaborated, performed and toured with jazz trumpeting great, Roy Hargrove (Verve Records) and is the featured vocalist and co-writer of the tune “How I Know,” on his Grammy nominated CD “The RH Factor.” That same year Shelby became the voice of Kmart’s National “Right Here, Right Now” ad campaign. Thanks to Shelby’s soulful vocals, this is one of the most successful & recognizable retail ad campaigns for the company to date.

In addition to touring and recording with D’Angelo, Hamilton, and Hargrove, Shelby also had the honor of working with Mary J. Blige, Santana, and bassist Larry Graham. In 2006, it was Graham — of Sly & the Family Stone — who asked her to to perform at Prince’s 3121 Club in Las Vegas. Shelby joined the New Power Generation that year and began touring with Prince worldwide. Shelby didn’t expect to tour so long with him, but the superstar became a mentor and big brother to her. As Shelby told journalist Tina Firesheet in 2013, “I’m gonna ride with him until the wheels fall off.”

And that she did. Shelby J. went on to sing co-lead on Chelsea Rogers, from Prince’s album Planet Earth, and contributed her voice to other tracks such as Future Soul Song, Future Baby Mama, Mr. Goodnight, and Colonized Mind. She also performed on stage with Prince during his 2007 Super Bowl Halftime show, deemed the best Halftime show in history by many.

After Prince’s death in April 2016, Shelby released her debut album titled “10”  in 2017 which beautifully showcases her vocal range and musical influences from neo-soul, jazz, funk, rock, and pop. In their last meeting at Paisley Park, Prince told Shelby “Don’t come back here without that record”.  She kept her promise and released the album on the one year anniversary of his transition.The album is titled “10” for the ten years she performed with Prince, for her birth date on the 10th of September, and for the ten songs on the album.  .

Shelby J. also sang lead alongside Kip Blackshire for the 2018 Prince: Live on the Big Screen show at the Target Center in Minneapolis, syncing live musicians to recordings of Prince and is set to do it again this April to celebrate the life of her dear friend in conjuction with Paisley Park’s Celebration 2019 event.

On December 25,2018, Shelby proudly announced to her fans that she was a breast cancer survivor and released a new single, God is Here, to commemorate being cancer free. God is Here is available exclusively on iTunes and the studio album 10 is available on iTunes, Spotify, and Tidal along with her 2012 single North Carolina which hit No. 1 on Amazon’s Neo/Soul R&B charts and was a long-time top-seller. This song features fellow North Carolinian Anthony Hamilton and is co-written and produced by Prince.

Shelby J. is the CEO of Blackgypsy Enterprises which specializes in spreading positive messages through recorded music, books, art, fitness training & live performances. The core messages of her company inspire love and light and her latest U.M.I. movement is designed to uplift, motivate, and inspire people around the world.

ABOUT PRINCE’S FRIEND:
Writer, producer, and entrepreneur Eloy Lasanta, widely known as YouTube channel host “Prince’s Friend”, has carved out a niche for himself as a Prince Rogers Nelson historian in the entertainment industry’s world of music fandoms. His channel, Prince’s Friend, is also the name he goes by in this community, works independently of the Prince estate but remains aligned with the overall mission of keeping Prince’s legacy alive through explorations of his songs, albums, movies, messaging, estate news, as well as his posthumous celebration events and music releases. Prince’s Friend takes some deep dives into Prince’s career which spanned over five decades and looks closely at all directions of his journey.