BiKi.com, while still a relatively new cryptocurrency exchange, managed to emerge tops on the Forbes Top 10 listing of blockchain companies to watch in 2019.

Singapore, July 08, 2019 -- BiKi.com, while still a relatively new cryptocurrency exchange, managed to emerge tops on the Forbes Top 10 listing of blockchain companies to watch in 2019. The highly sought-after listing included 10 blockchain companies from all over the world that have made significant contributions to blockchain becoming more accessible, prominent and mainstream. 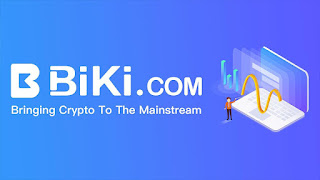 Founded in June 2018, BiKi.com began operations in Aug 2018, headquartered in Singapore. Co-founder of Huobi and CEO/founder of established media group Jinse Finance, Du Jun invested USD 5 million in personal funds and served as joint CEO of the infant exchange. The global digital currency trading platform has a strong technical and operations team, committed to creating the safest, most stable and efficient platform for users around the world. Presently, it supports languages ​​such as Chinese, English and Vietnamese, with more in the pipeline, and has served more than 1 million global users in nearly 100 countries and regions.

In under a year, BiKi.com has become one of the fastest growing exchanges in the world. With 1.5 million registered users, 100,000 daily active users and a daily trading volume of 70 million USDT, it has been steadily climbing up the rungs of the global crypto exchange ladder on popular sites like Coingecko, Feixiaohao, Mytoken, Aicoin and will soon join Coinmarketcap. It currently has more than 200 active WeChat communities out of a total of nearly 500 and a buoyant telegraph group.

We look at the main factors contributing to BiKi’s rapid growth.

Using incremental marketing, BiKi.com has managed to amass many registered users in numerous third- to fifth- tier Chinese cities while simultaneously ushering in new market users from the Chinese and global internet. The exchange's ‘transformative way of scaling communities’ has successfully accelerated growth in its user acquisition division. BiKi also helps its projects to increase its market users unlike other exchanges such as Huobi, Binance or OKEx.

BiKi’s attractive Community Partner Program has also been instrumental in boosting the influx of traffic to the platform. By simply holding at least 30,000 worth of BiKi locked-in for 1 year, users are eligible to become Community Partners who earn 10% interest like a time deposit and get 60% cashback on trading fees as well as bonus rewards and token airdrops.

BiKi has professional market-making strategies and a full range of service tools for users through a bull or bear market while providing media exposure support and assistance for partner projects.

BiKi’s platform coin creates a system of deflationary economics based on its principle of “mining, repurchasing and burning”. The initial token issuance of 1 billion will continuously be repurchased and burned till it decreases to 100 million. So far 100% of its platform fees have been used to repurchase and burn the platform currency, with 274 million already burned in the past 6 months. Next, the platform also has plans to launch the BiKi transaction pair, whereby projects will then raise funds in BiKi instead of ETH, again bringing value to the BiKi coin. With its business locks, institutional node locks and user financial locks, BiKi coin circulation is drastically reduced, thereby increasing the value of the BiKi coin.

From its starting price of $0.01384188 in mid April this year to its current price of 0.134539, BiKicoin has charted an impressive upward trajectory, representing an almost 10-fold increase in less than 3 months, a clear indication of investor demand and recognition of the coin’s value. 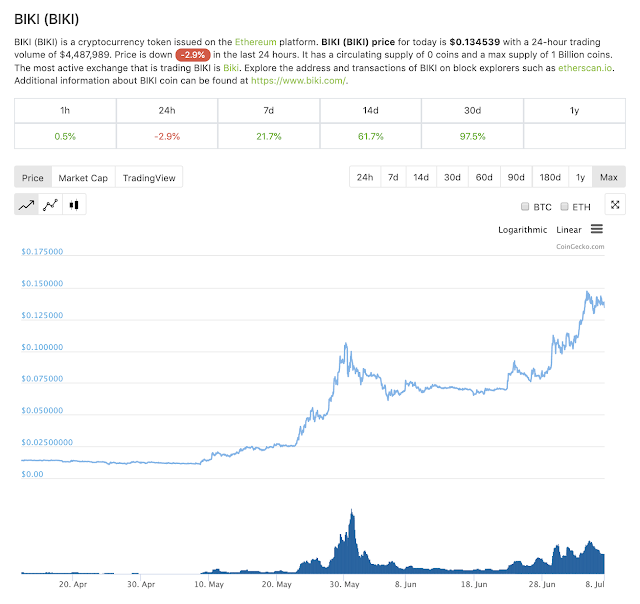 Committed to bringing digital assets to the mainstream market, it is not surprising that Forbes has ranked BiKi.com amongst its Top 10 Blockchain Companies to Watch in 2019. With BiKi’s continued focus on incremental marketing and global market expansion, together with improvements in services, community programs and also on its platform, BiKi appears poised to continue its ascent to the top flight of crypto exchanges.