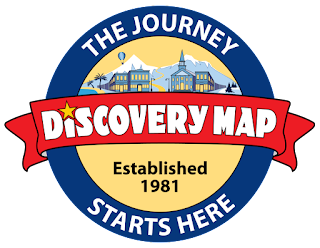 Laura, Aidan and Patrick Gordon, owners of Discovery Map of El Paso, received the 2018 Outstanding Inaugural Edition award. The Gordons (mother Laura and daughter and son Aidan and Patrick) nearly sold out the available map spaces in the first year of the map, 2018. They exceeded the required first year sales by 325 percent.

Jeff Stevens, owner of Discovery Map of Albuquerque and Discovery Map of Santa Fe, New Mexico, received the 2019 Community Collaborator Award. Stevens forged a relationship with Visit ABQ and continues to "think outside the box" regarding collaborative initiatives.

“The Gordons, the Curlees and Jeff are very deserving winners of our first ever franchise owner awards for their respective accomplishments,” said Peter Hans, president of Discovery Map. “What’s really impressive about this group is that they have shown what is possible to accomplish as new franchise owners and as a seasoned veteran and how to grow your business by working with resources in their respective communities.”

For being named winners of the Discovery Map Franchise Owner awards, Gordons, the Curlees and Stevens received a commemorative plaque and a $500 credit toward the publishing of the next edition of their respective maps.

Discovery Map has more than 130 maps across the U.S. and Canada. It is the charge of franchise owner to sell advertising space on the map and the online version of the map, available at discoverymap.com. The typical franchise owner will publish a printed map once or twice per year, depending on the initial print run and the popularity of the map.

Forbes Magazine recently named Discovery Map® one of the top 10 franchises to buy with an initial investment under $150,000. In 2018, it won the Top 50 Franchisee Satisfaction Award based on a survey conducted by FranchiseBusinessReview.

About Discovery Map:
Discovery Map International is the country’s leading provider of curated guides to top tourist destinations, cities and towns throughout North America. The distinctively colorful, hand-drawn maps are a favorite of travelers for navigating local dining, attractions, businesses, cultural experiences, ski destinations – and even the best locations to take selfies. Discovery Maps can be found in local hotels, restaurants, shops, visitor information centers and other participating venues, and at discoverymap.com. Named by Forbes as “one of the best franchises to buy” in 2015, Discovery Maps International is headquartered in Waitsfield, VT, in the heart of the Green Mountains.