Top 20 CoinMarketCap exchange BiKi.com is launching its premiere IEO. The exchange has officially announced a strategic investment in the XueBi trading platform and is launching a first ever IEO for its platform coin XB.

Singapore, Feb 20, 2020 -- Top 20 CoinMarketCap exchange BiKi.com is launching its premiere IEO. The exchange has officially announced a strategic investment in the XueBi trading platform and is launching a first ever IEO for its platform coin XB. 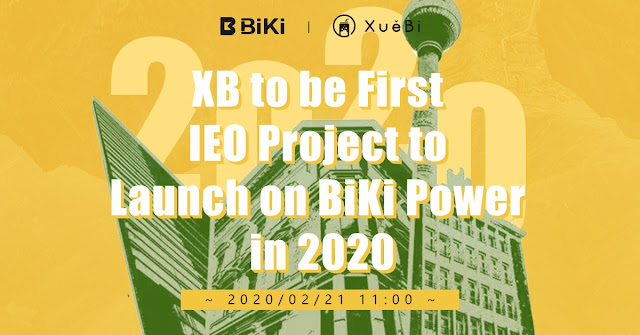 Financing is the lifeblood of any project, whether via IPO, ICO, IEO or STO. The trend favoring IEOs over ICOs has marked a turning point in financing for digital assets. Compared with ICOs, IEOs ride on the credibility of the exchange, a seeming guarantee of reduced investment risks, since exchange listing after IEO is assured.

The BiKi Industry Fund recently invested USD 1 million on the XueBi trading platform. The two parties have entered into a strategic cooperation where their platforms will complement each other in terms of assets and traffic. XueBi.io is alleged to be the world’s first community federated digital asset trading platform. Its products include currency trading, OTC trading and ETF trading, including leveraged ETF. An index fund that uses financial derivatives and debt to amplify returns, with leveraged ETF, traders can sell short or long regardless of market fluctuations. With limited funds, traders can obtain higher returns without borrowing and without deposits.

Its first IEO project in 2020, BiKi will launch a subscription for XueBi (XB) under BiKi Power for XB/USDT pair on Feb 21st GMT +8. Trading will begin 7 hours later on the same day.

With demonstrated utility, platform coins can be profitable. Having an exchange behind them gives them more investment value.

Riding on the wave of the halving boom, platform coins have also become a new favorite. As an aphorism in the stock markets goes, the harbinger of a bull market is a surge in brokerage stocks. In the crypto markets, platform currencies can be compared to brokerage stocks.

How the BiKi Platform Token Derives its Value

The BIKI platform token derives its value from 2 aspects - its utility and the deflationary model, which consists of token buyback and burning to decrease the circulating supply. The reduced supply increases the value of the token.

1. Using BIKI token to pay for transactions allows traders to enjoy a 25% discount.

3. XB IEO subscription requires users to have an average monthly position that is greater than 10,000 BIKI, ie., only BIKI token holders and partners can enjoy BiKi’s IEO subscription.

1. First platform to adopt 100% token buyback and burn. BIKI has reached a burn ratio of 39.8%. This may not seem like a high ratio but it is most sustainable. BiKi is one of the few exchanges that uses 100% of transaction fees in buyback of the token, compared to 20-30% for other platform tokens. With contract and leverage income added to the buyback, in the long run, the amount of BIKI token burnt is expected to be the greatest.

2. Partners lock BIKI tokens to share more platform rights and dividends. The BiKi mining pool offers attractive annualized returns of up to 20%, which will also lead to more locks of market liquidity.

With these implementations, the demand for the BIKI token continues to increase as the circulating supply deflates, forming a positive feedback for the entire BiKi ecosystem. BiKi.com’s strategy is simple - continuing to add utility and deflationary measures to keep  increasing the value of the BIKI token.

As the battle of the exchange platforms ensues in all areas - from spot to contract, from IEO to wealth management and mining pools etc, BiKi will continue to be user-centric in its initiatives as it builds a blockchain financial center.

About BiKi.com:
Headquartered in Singapore, BiKi.com is a global cryptocurrency exchange ranked Top 20 on CoinMarketCap. BiKi.com provides a digital assets platform for trading more than 150 cryptocurrencies and 280 trading pairs. BiKi.com is focused on providing the safest, most stable and most effective cryptocurrency trading platform. 100% of the transaction fees are used in buyback and burning of platform token, BIKI. Since its official opening in August 2018, BiKi.com is considered one of the fastest-growing cryptocurrency exchanges in the world with an accumulated 2 million registered users, 200,000 daily active users, over 2,000 community partners and 200,000 community members. BiKi.com has received investments from Huobi co-founder Du Jun, Genesis Capital Zhu Huai Yang, FBG Capital, ChainUP and others totaling approximately 10 million USD.