The 261-lot auction has a start time of 10:30 am EDT. The full catalog is up and online now, on Invaluable.com, Auctionzip.com and LiveAuctioneers.com. Many categories are represented.

Westport, CT, USA, April 22, 2020 -- Bob Dylan’s handwritten and signed lyrics to the classic rock song Like a Rolling Stone, a superb document signed by the British physicist Sir Isaac Newton, and discharge papers for a teenage soldier who lived to be 100 signed by George Washington are just a few of the highlights in University Archives’ next online-only auction, slated for Wednesday, May 6th.

Telephone and absentee bids will also be accepted. Folks can visit the website and browse the full color catalog now, at www.UniversityArchives.com. 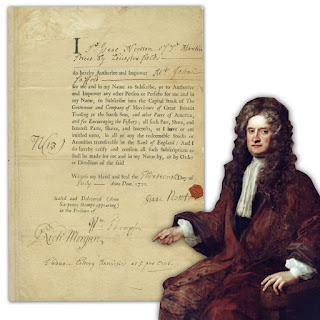 The auction is packed with rare books, manuscripts, relics and more, many of them signed by history’s brightest luminaries. Presidential items span the administrations of George Washington through George H.W. Bush (including 11 lots pertaining to Abraham Lincoln); Civil War and slavery (including Grant and Lee); and foreign (Vladimir Lenin, Napoleon, Catherine II and many others).

The literary category will feature Part 3 of items from the legendary Beat writer Jack Kerouac’s estate plus items from Ernest Hemingway, Samuel Clemens, Eugene O’Neill and others. Science and space will include Newton, Charles Darwin, Thomas Edison and the Apollo and Gemini missions.

Nearly 50 lots comprise Part 2 of the Forbes Collection – items from multimillionaire magazine publisher Malcolm Forbes (1919-1990) and his sons, including a dazzling array of foreign and presidential pieces. A group of King George III’s Acts of Parliament (1766-1775) including one of the Townshend Acts and several punitive Acts, illustrate life in the American colonies on the eve of the Revolution.

Bob Dylan’s Like a Rolling Stone was voted the number one rock ‘n’ roll song of all time by the readers of Rolling Stone magazine in 2004. The lyrics to the song, handwritten by Dylan on a single 8 ½ by 11-inch sheet plus his signature, have been authenticated by Dylan’s manager, Jeff Rosen. The lot has an estimate of $75,000-$85,000.

Other presidential material – from FDR, JFK, Lincoln, Jackson, Reagan and others – is sure to be of interest. Included is a 21-page original corrected draft of an article written by Harry S. Truman that appeared in a 1958 issue of Look Magazine, in which Truman demands respect for the office of the presidency, praising Lincoln, Washington, Jefferson and both Roosevelts, while criticizing  Fillmore, Taylor, Pierce and Harrison as mediocre. The lot is expected to make $2,000-$2,400.

Jack Kerouac fans will be thrilled to see the latest treasures from the Beat writer’s estate, Part 3, including almost 50 lots of Kerouac’s apparel, books and beloved possessions. This installment will contain Kerouac’s mailbox from his home in Florida; his much-loved crucifix with rosary bead fragment; the wedding band he presented to his third wife, Stella; and original photographs.

Other memorable Kerouac will items include his personal tobacco pouch, Panama hat, velvet slippers, Catholic religious icon, Buddhist or Hindu silver ceremonial cup and kitschy 1960s entertainment accessories. Books are estate stamped and sealed; other items will be accompanied by estate certification signed by John Shen-Sampas, executor of the Kerouac estate by descent.

One interesting Kerouac item added to the auction is a four-page letter handwritten and signed by him, dated Oct. 26, 1954 and addressed to Robert Lax (1915-2000), Kerouac’s friend, fellow writer and a Catholic. The letter explores Christianity, Buddhism, spirituality, philosophy and linguistics and mentions Kerouac’s upcoming book, Some of the Dharma (est. $15,000-$16,000).

A letter written and signed by Russian leader Vladimir Lenin (1870-1924), penned between the failed revolution of 1905 and the successful revolution of 1917, while he was in exile in Berlin, Germany, has a pre-sale estimate of $50,000-$60,000. Also, World War II lot pertaining to The Big Three at Yalta (Churchill, Roosevelt and Stalin), including a currency note signed by all three men and a photo signed by FDR and others in Hawaii, should finish at $12,000-$15,000.

University Archives is happy and honored to be able to make a generous donation to Feeding America, a non-profit organization administering to over 200 food banks across America. The contribution was made possible by the success of the March sale and the already significant interest in the May sale. “Considering Feeding America’s 4-star rating from Charity Navigator, the independent charity evaluator, and with over 98 percent of its monetary donations earmarked for food, we are confident that these contributions will go far,” said John Reznikoff, the president of University Archives.

About University Archives:
University Archives has become world-renowned as a go-to source for rare items of this kind. It is actively seeking quality material for future auctions, presenting a rare opportunity for sellers. Anyone who has a single item or a collection that may be a fit for a future University Archives auction may call John Reznikoff at 203-454-0111, or email him at john@universityarchives.com. University Archives was founded in 1979, as a division of University Stamp Company, by John Reznikoff, who started collecting stamps and coins in 1968, while in the third grade. Industry-wide, Reznikoff is considered the leading authenticity expert for manuscripts and documents. He consults with law enforcement, dealers, auction houses and both major authentication companies. For more information, visit www.universityarchives.com.