Larry Montgomery, Sr. A Prolific Author and Publisher has written over 100 books which include various genres which are listed below.
New York, NY, Sep 7, 2020 -- Larry Montgomery, Sr. A Prolific Author and Publisher has written over 100 books which include various genres which are listed below. As a member of Glory Temple Ministries, Inc., under the Pastorship of Senior Pastor Apostle Ronnie Deadwyler and Executive Pastor Apostle Dr. Karen Deadwyler, who in obedience to the Father, planted the seed of "Scribe" on Minister Montgomery's heart.
To that end, Minister Montgomery committed to penning twelve of the Lord's parables under the cover of the life and times of a fictional character named U.S. Marshal Harry Bailey. He has continued to be obedient in writing down the messages that God plants in his heart and remains committed to spread his literary works around the globe.
ABOUT THE AUTHOR: Larry Montgomery, Sr., Montgomery has authored over 100 Novels, Novella's and Short Stories inclusive of Mysteries, Thrillers, Comedy's, Sci-Fic and Christian Teaching Study Guides. Mr. Montgomery is a retired Commercial Bank Vice President currently publishing the only weekly African-American community newspaper in Nassau County, Long Island, New York the Village Press, Inc. Montgomery earned his MBA from Hofstra University in Hempstead, New York where he grew up, married his wife Joyous Reynolds of 40 years plus years and raised three loving children. Montgomery served in the Viet Nam War as an Air Force Security Police Sgt. And has taught both Business and Management Finance at the University levels. Mr. Montgomery is the former publisher of the oldest weekly print and subsequently online, community newspaper focused on the African American communities of Nassau and Suffolk Counties.
At its peak the newspaper included two branded news magazines; 1) Village Life an arts and entertainment magazine and 2) The Long Island Gospel News Journal which focused on the gospel. EBG has also published over 60 Manuscripts on fiction and Christian living most are available on Amazon.com. Licensed and Ordained Minister of the Gospel, Glory Temple Ministries, Inc., New York. Self-Published Author of over 15 Christian Study Guides, and 85 Secular Fiction works. I look forward to discussing my experience in person.
ABOUT THIS BOOK: Why We Bow Down and Worship Him…Bow down and worship him for the treasure within you is life and this life is lived in the spirit realm, and spirit led for the time it spends in the natural realm for those who truly believe in God 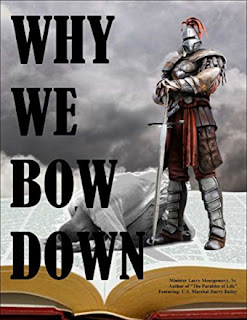