Kobe Bryant Signed and Inscribed Middle School Yearbook with an L.A. Lakers Reference up for Bid at IconicAuctions.com

The auction, featuring over 700 lots of rare collectibles, is online now and ends February 29th. Also up for bid is a signed love poem handwritten in middle or high school by Michael Jordan. 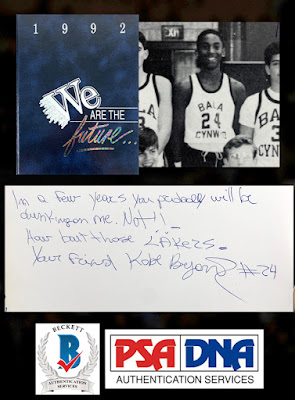 Interested parties can view the entire auction catalog and bid now, at www.IconicAuctions.com. Most of the items have been authenticated by Beckett, REAL, James Spence and other reputable authenticating services. Others still are accompanied by letters or certificates of authenticity.

Over 700 lots are up for bid, in a range of collecting categories, not just sports. These include politics and history, music and entertainment and more, with rare, collectible items signed by such luminaries as George Washington, Thomas Jefferson, The Beatles, Babe Ruth, Lou Gehrig, Bob Dylan, Abraham Lincoln, Tupac Shakur, Derek Jeter, Ted Williams, Mike Trout and others.

The yearbook, from NBA legend Kobe Bryant’s 8th grade year at Bala Cynwyd Middle School in Pennsylvania, is boldly inscribed in blue ballpoint pen on the second-to-last left page. It says: “In a few years you will probably be dunking on me. NOT!! How about those Lakers – Your friend, Kobe Bryant #24”. Four years later Bryant wore #24 for the Lakers (minimum bid: $2,500).

The Michael Jordan love poem, titled “Only You”, was penned by His Royal Airness to a girl he presumably fancied at school. In turns it is sentimental (“Only you can kiss on my cheeks”), devout (mentioning “the great man above”) and awkward (“I hope you grow very, very tall”). The signature is a rare full-name example and an early Jordan autograph (minimum bid: $2,500).

“The market for basketball autographs and memorabilia has exploded in the last several years, and the Kobe Bryant middle school yearbook and Michael Jordan handwritten teenage love poem are two of the most unique pieces we've ever handled in that genre,” said Jeff Woolf, the president of Iconic Auctions. The Kobe yearbook, in particular, is both timely and poignant.”

Woolf added, “It’s crazy if you think about it. Here’s a kid rooting for the Lakers who not only ends up a player on the team four years later, but arguably goes on to become the greatest player in team history. You just don't see something so prophetic like that ever surface. It's amazing. Bryant mentions in his Showtime documentary that he developed his mentality for basketball during the time when this yearbook was signed. You can see that reflected in his first sentence.”

An exceedingly rare four-language ship’s pass document dual signed by George Washington (as President, “Go. Washington”) and Thomas Jefferson (as Secretary of State, “Th. Jefferson”), dated June 21, 1793, carries a minimum bid of $10,000; while a letter handwritten by Abraham Lincoln on Executive Mansion stationery, dated May 11, 1861 (even “Executive Mansion” was handwritten by Lincoln), addressed to the Secretary of the Navy, has a minimum bid of $5,000.

An original pressing from 1963 of the U.K. Parlophone album With the Beatles, signed by all four members of the Fab Four, in overall fine condition with multiple surface impressions, has a minimum bid of $5,000. Also, a stereo pressing of the classic 1965 Columbia album Bringing It All Back Home, boldly signed by singer, songwriter and poet Bob Dylan in blue felt tip marker, a near-mint offering from one of the toughest signers in the world, has a minimum bid of $1,000.

A baseball dual-signed by Babe Ruth and Lou Gehrig while the two were part of a barnstorming tour of cities across the country, featuring Ruth’s bold signature in blue ink across the sweet spot and Gehrig’s on the panel below, has a minimum bid of $5,000. Also, a Hillerich & Bradsby W166 model bat dating from 1951-1954, game-used by the Splendid Splinter Ted Williams, with ball marks and Williams’s number “9” handwritten on the knob, has a minimum bid of $3,000.

The earliest-known game-used jersey from Derek Jeter, worn when he was a player with the minor league Greensboro Hornets, size 46, with impeccable provenance from the team oner at the time, has a minimum bid of $3,000; while a 33 ½ inch Old Hickory baseball bat used by Mike Trout in the minor leagues, signed by the Los Angeles Angels slugger “Mike Trout, 2010 Game Used”, with multiple ball marks, a crack and taped handle, has a minimum bid of $2,000.

The very American flag flown over the United States Capitol building during Barack Obama’s historic presidential inauguration in 2009, encased and with a letter authenticity from the Acting Architect of the Capitol, Stephen T. Ayers, has a minimum bid of $1,000. Also, Tupac Shakur’s rare, handwritten and double-signed lyrics to the unreleased track Tha Brightness of Your Smile, overall in fine condition with minor handling wear and discoloration has a minimum bid of $750.

Iconic Auctions is based in Scottsdale, Arizona and operates under the corporate name Iconic Memorabilia, L.L.C. The firm is always accepting quality consignments for future auctions. To consign a single item or a collection, call them toll-free at 1-800-325-7127; or, send an email to jeff@iconicauctions.com.

For more info on the Feb. 29 auction, visit www.iconicauctions.com.

About Iconic Auctions:
Iconic Auctions is based in Scottsdale, Arizona and operates under the corporate name Iconic Memorabilia, L.L.C. The firm is always accepting quality consignments for future auctions. To consign a single item or a collection, call them toll-free at 1-800-325-7127; or, send an email to jeff@iconicauctions.com. For more info, visit www.iconicauctions.com.